Adams Bail Bonds is a statewide, family-owned and operated bail bond company that has been helping Californians since 1987. We take pride in being active members of the communities that we service. You have a friend on your side when you choose to work with one of our bail bondsmen. We will do whatever we can to help you make our bail bonds more affordable for you.

When you call us, we will call the jail for you and get the most up-to-date bail information for you. There are different types of bail bonds and sometimes the jail may not have given you the detailed information needed to help you. We will also find out if there are any “holds” or additional warrants for the person in jail. It is important to verify what type of bond is set, so you don’t pay too much.

We take the time to do this so you know exactly what the person is charged with, and we verify so there will be no surprises when we meet with you to post the bond. Most bail bond agencies will not take the time to verify the bail information for you. We do.

We won’t simply quote you a price and hang up leaving you more confused! The vast majority of our bonds are approved with no collateral. We don’t require perfect credit either. Co-signers with decent jobs and family members who feel confident that the person in jail will make all of their court dates are more important to us.

Getting someone out of jail is fast and easy when you have Adams Bail Bonds working for you! We are the Number One Bail Bond Company in Fresno, California.

Talk to one of our knowledgeable and helpful bail agents. They are always available and ready to help you 24 hours a day, 7 days a week. Consultation is always FREE! Se habla español. 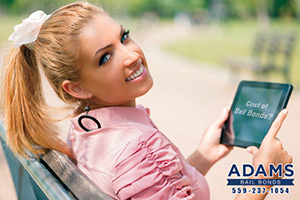 How Much Does A Bail Bond Cost In California?

Are you looking to bail a friend or family member out of jail, but are worried about the cost? Do not fret, Adams Bail Bonds can help you out. We have been making bail bonds cheap and affordable for Californians for the last 30 years.

In California, all bail bonds start out as 10% of the person’s bail. This means that if your loved one’s bail is set at $10,000, his or her bail bond will only cost $1,000. This is the standard price set by the state of California, however, some bail bond companies can offer you a discount. 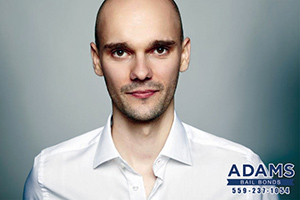 How Long Does Bail Takes?

Whenever something is called a process, people automatically assume it is going to take a long time. Things that can be done quickly, do not typically have a process. However, there are some exceptions to that rule. One such exception would be the bail bond process. With the right bail agent, you can have your loved one bailed out of jail in just a few hours.

When you are trying to bail a friend or family member out of jail, be sure to find a bail agent who knows what he or she is doing, but also works quickly. When done properly, the bail bond process can be a quick and easy experience. 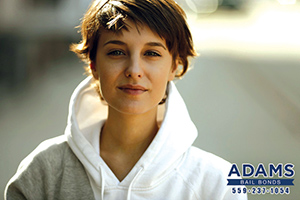 Do You Need Collateral?

At Adams Bail Bonds in Fresno, we choose to trust our clients instead. We only require a signature of a working co-signer as collateral. This way, the clients do not have to risk losing a house, car, or something as equally important. This can take a lot of stress off of the client, and in turn, make the bail bond process easier.

Vandalizing a Place of Worship

California lawmakers don’t care if you were simply bored and decided adding some graffiti to a church wall would make life more interesting, if you were angry and knocked over ...
Read More

How Serious is Road Rage

The first time the term “road rage” was officially used was during the 80s when a team of broadcasters decided the term perfectly summed up the cause of a highway ...
Read More

Unless you have the card owner’s permission, it’s illegal to use a credit or debit card that doesn’t belong to you. It doesn’t matter if you found the card lying ...
Read More

Finally! Halloween is here. Not only does that mean cooler weather, pumpkin spice coffee, and an excuse to snuggle up with a good book rather than going out, kids will ...
Read More